Tag: interesting in majoring in business 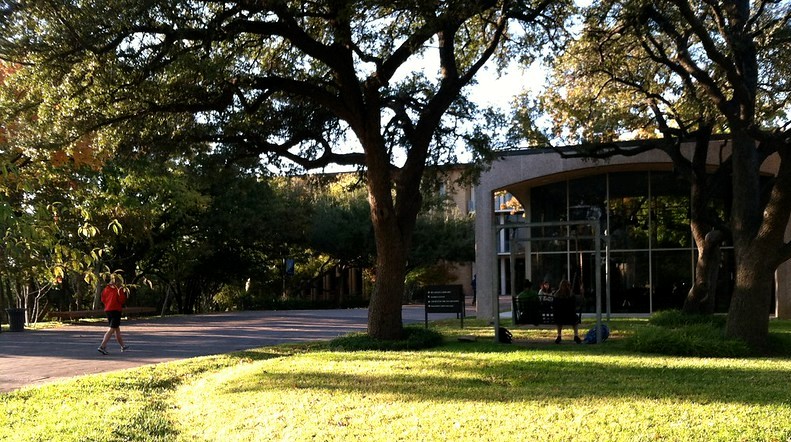 University of Dallas is described as the best Roman Catholic university south of Washington, D.C., and while 80% of the student body is Catholic, you don’t have to be Catholic to attend. Located on 744-acres about 15 minutes from downtown Dallas, UD remains dedicated to its classic liberal arts education, focused on Western philosophy and tradition.

Here are a few quick facts about UDallas:

Housing: University of Dallas has a small, safe campus. Eighty-five percent of freshmen and about fifty percent of all students live on campus. Students under the age of 21 who don’t live at home with parents must live on campus in single-sex dorms with strict visitation regulations.

The sole dining hall is spacious and has great views, but most students agree that the food is too expensive for the quality. The Rathskellar offers fast food and snacks that are more popular with the student body.

Academics: The foundation of academics at University of Dallas is the 4-semester Western civilization Core curriculum, which includes courses in philosophy, English, math, fine arts, science, American civilization, Western civilization, politics, economics, foreign language, and two theology courses. Seniors must complete a thesis or project, comprehensive exam, and/or senior seminar, depending on their major. Eighty percent of undergraduates complete a semester in Rome, usually during sophomore year, including rigorous coursework, as well as trips to northern Italy and Greece and time for personal travel.

When it comes to majors, UD offers 25 majors and 33 concentrations. For students studying business, there are plenty of internship opportunities in the Dallas-Fort Worth Metroplex. University of Dallas also offers combined degrees, like the 3-2 dual-degree program in nursing and electrical engineering and 4 + 1 bachelor/master’s programs in a variety of fields.

UD does not use any teaching assistants and more than half of all classes enroll fewer than 20 students, so undergraduates get the opportunity to really get to know their professors and vice versa.

Social: University of Dallas does not have any fraternities or sororities, so the Campus Activities Board sponsors most of the on-campus entertainment, including free movies, dances and visiting speakers. In the fall, the junior class organizes fundraising events for the annual Charity Week. The most popular event on campus is Groundhog, which features a week of events celebrating Groundhog Day and culminates in a huge on-campus party at Groundhog Park. For students who want to venture off campus, Dallas offers endless opportunities, and San Antonio and Austin are also not far away.

While football doesn’t draw as much attention as in other Texas schools, Crusaders baseball and men’s and women’s basketball and soccer teams are pretty competitive in Division III Southern Collegiate Athletic Conference. UD also offers intramural sports, and about a quarter of students participate.

Financial: University of Dallas offers both need-based and non need-based merit aid. UD does not offer any athletic scholarships. The average percent of need met is 85%, with 24% being fully met.  Although the tuition and fees are $63,400, the average financial aid package is $33,490. 97% of students receive some type of financial aid.

If you are looking for challenging academics at a college where you can also enjoy a thriving city scene, you may want to consider New York University. Located primarily on Washington Square and in the heart of Greenwich Village, students will find trendy shops, galleries, bars and eateries in the surrounding blocks with SoHo, Little Italy and Chinatown nearby.

Here are a few quick facts about NYU:

Housing: While there was a time when NYU students had to “fend for themselves” in the outrageous New York housing market, students are now guaranteed four years of housing in one of the 22 residence halls. Most rooms have a private bath and are nicer than a lot of city apartments. Freshmen live in one of the freshman residence halls, many of which have themed floors. 43% of undergraduates live in university housing. NYU offers a free shuttle service to dorms that are farther away from academic buildings.

Campus dining halls offer extensive options, including a dedicated kosher eatery. Students also have plenty of inexpensive options  in the restaurants located downtown. Safety is taken very seriously at NYU. Students state that they see plenty of security officers patrolling, both on foot and in patrol cars. NYU Trolley & Escort Van Service provides door-to-door transportation until 3:00am so students (and parents) can be assured they will get back to their dorm safely.

Academics: New York University’s Under the Core Curriculum prescribes freshman and sophomore to take courses in foreign language, expository writing, foundations of contemporary culture, and foundations of scientific inquiry. The foreign language options are much broader than most universities and include Arabic, Cantonese, Hindi, Modern Irish, Swahili, and Tagalog.

Despite the large student population (27,000 undergraduates plus 25,000 graduate students), 59% of classes have fewer than 20 students. Even though many classes are taught by graduate students, most of the introductory courses are taught by a well-known, “top notch” professor. NYU students describe the faculty as being reasonably accessible. To help ensure student success, students meet with their academic advisor at least once every semester.

New York University boasts many noteworthy schools and programs. The Tisch School of the Arts has trained many successful actors and directors including Marcia Gay Harden and Martin Scorcese. The Stern School of Business is known for having an accounting program with a high job-placement rate. Students who are looking for more flexible schedules and the opportunity to engage in independent study can find that in the Gallatin School of Individualized Study.

Opportunities abound for the NYU student. The career center is very well-run and helps connect students to one of thousands of on-campus jobs, full-time jobs and internships. Also, with eleven academic sites internationally as well as exchange agreements with universities around the world, it’s no wonder 56% of NYU students take advantage of the opportunity to study abroad.

Similar colleges to consider: U of Southern California, Cornell, Boston U, Northeastern

Social: Understandably, the majority of social life takes place off-campus. Students can attend Broadway performances, shop in SoHo, or hang out in Greenwich Village without having to go too far. That’s not to say there is nothing to do on campus. Students can become involved with their choice of more than 600 clubs and organizations and attend on-campus concerts and movies. Fraternity and sorority events are another popular on-campus activity, although only 5% of men and 7% of women “go Greek.”

In the spring, NYU hosts their Strawberry Festival, which features free berries, and many students march in the Halloween Parade that takes over Greenwich Village each October. The Violet Ball is another well-attended event, which gives students an excuse to get dressed up.

Sports is not NYU’s greatest strength. However, they do have several successful programs, including men’s and women’s golf, swimming and diving, and men’s wrestling which all compete in Division III. One-third of students participate in intramural sports.